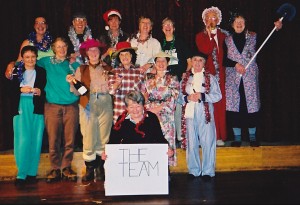 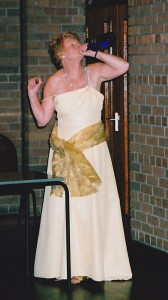 PRESS REPORT BY WIN WILLIAMS FOR THE COUNTY NEWS LETTER

A beautifully dressed lady in full evening regalia presented herself to the audience.  Obviously making for the sherry bottle on a nearby table she paused to announce the arrival of “The Albric Follies”.  She was the “Mistress of Ceremonies”! 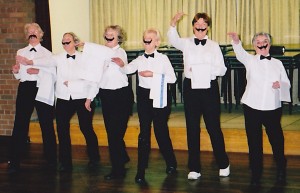 A “Sextet Barber Shop” with the occasional slip of the moustache was the start of a hilarious hour of entertainment which included monologues, duets and sketches.  Duets included the “Bridesmaid Who Would Never Be A Bride”, “Some Mothers Do Have ‘Em”, “Ladettes” – two mothers recalling the youth of their sons, “Wish You Were Here”, and “Two Sunbathers”, one very well covered strutting before a handsome lifeguard who wore water wings for rescues. 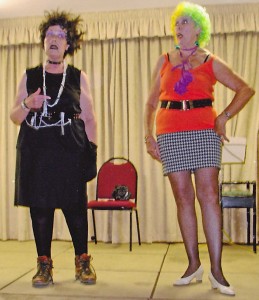 A “Husband Rejoicing” in the fact that his wife was at WI and he could have a good nosh of unhealthy food was a monologue presentation as was “The Wife” who presented many ways to kill her husband.  Being “Sexy At Sixty” and “Packing The Trunk For A Weekend Away” were two more presentations and the “Green Eyed Yellow God of Mad Carew” all appeared before us.
Meanwhile our “Mistress Of Ceremonies” had greater and greater difficulty as each visit before the audience resulted in a tipple from the bottle, her dress became somewhat dishevelled and her gait less steady.
The party of “Morris Dancers” with bells on their legs clattered and clashed their sticks narrowly avoiding disaster and injury.  Finally all the cast members took their bow in “Green Grow The Rushes O”.

A most professional performance.  The long awaited return had passed all expectations, next one please.